Five things I learned in Istanbul

Legend has it that a young boy in Isfahan, Iran, a small but important city on the old Silk Route, used to fight with every caravan traveller, passing through the city, when they mentioned the mosque in Kustuntuniya (Constantinople or modern-day Istanbul) was the largest in the world. He would insist that his local mosque was the biggest. Years later he got a chance to visit Istanbul and was initially over-awed to see the grandeur of the mosque and then felt embarrassed at his own stupidity. 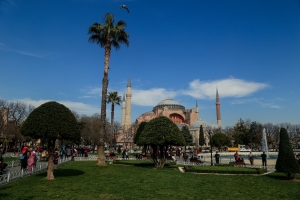 The puerile insistence of a teenager, centuries ago, can be dismissed as obvious ignorance due to lack of exposure. However, there are many, even today, who under-estimate the mystique of this historical city, straddling two continents, that remained the seat of power for 15 centuries for two of the world’s greatest empires, Byzantine (Eastern Roman Empire) and the mighty Ottomans.
Even this humble writer was guilty of the same delusions before visiting the city. Recently I got the chance to visit the fabled city that not only corrected my perceptions but also taught me five important lessons.
Enduring Mystique
Walking extensively throughout the city soaking in the scenery, architecture, people, their cuisines and mood I, as an outsider, couldn’t sense the huzun (melancholy) that is all-pervasive according to Istanbul’s most famous resident Orhan Pamuk. The writer in his memoirs, Istanbul, rues the fact that modernity has gobbled up the beautiful town and its soul in which he was born and brought up. He says today what is left of the old grand city are some legends, gossips, a resigned hurt for being relegated to ordinariness and a false sense of pride in long lost glory.

But as a tourist, I found that the city and her residents retain enough richness to captivate the outsider. Their vibrant history, their enduring melancholy, and sizzling gossips have assumed a life of their own, lending a magical gravitas to whatever they do and whatever they possess.
Take the case of Topkapi Palace, there is a strong but unconfirmed story, that when an Ottoman king decided on his heir, he would call all his sons to the palace and a day before the coronation he would call for the son who would become the king while every other claimant would be killed a night before in cold blood. This was done to scuttle any future rivalry to gain the throne. Similarly, stories of fire destroying historically important buildings, their reconstruction, slave bazaars where beauty was sold with equal vigour as brawn, whets the appetite of the visitor to see these monuments.
It helps that the monuments have been preserved well especially the living monuments like the Grand Bazaar and Spice Bazaar. Built in 1455/56 they are one of the oldest functional covered shopping malls in the world. While walking through the piece of living history, I remembered being over-awed when I saw a shopping mall in the US for the first time fifteen years ago and thought what awe this bazaar must have generated among the people five centuries ago when they entered Istanbul after a long journey through sea or land. Nothing would have prepared them for this experience.
Istanbul taught me that history is still the most potent generator of mystique and an effective calling card for marketers to attract hordes of visitors.

Bohemian Streak
A stroll on Istiklal Street, near Taksim Square, during late evening and night, brings you face to face with Istanbul’s nightlife. It’s very different from the American nightlife built around pubs. It’s not that Istanbul doesn’t have a pub culture but it has more to offer than just pubs. The kehvaghars or coffee shops are no more in vogue as in the Middle Ages, yet restaurants, sweets corners, ice-cream parlours are everywhere. But it’s a small group of singers that perform at every nook and corner of the street that makes the place tick. People make groups around these performers, they clap, dance, sing with them, make videos and in the end pay a little money and move on.
During my visit, one day I saw a family of four women, mother, and two daughters and a granddaughter in a pram, were walking by and a drum player was performing. The young daughter, among the four, who was in her early twenties carrying the pram with a baby, just stopped and broke into a fine performance of belly dance. After dancing for fifteen minutes she carried on again with her family. The abandon and ease with which she did what she wanted to were striking. I realised that a vibrant nightlife where people can enjoy being themselves with their families without the fear of stalkers and violent groups is an absolute necessity for any city to assume the mantle of a global tourist hub.
Connected City
Istanbul is an amazingly well-connected city. Its public transport is world class and every corner of the city that has any historical or tourist value can be easily reached by either tram, bus or metro or all the three.
The buses are regular, so is tram and metro. Trams have lent a lot of grace and romance to the city. It has also brought ease as metro has in Delhi.

Despite the language being a barrier to the efficiency of public transport makes the city highly accessible and even a new traveller can be on his or her own.
Prosperity Matters
At the end of the First World War when the old Ottoman Empire finally crumbled, Turkey was termed as “the sick man of Europe” for its poor and crumbling economy. However, today it’s a first world country and it shows. Higher per capita income reflects in taxi drivers being well dressed and keeping their cars in spic and span condition. Small eatery owners maintain high standards of hygiene, wearing better clothes and offer good quality services. The fact that you can be a concierge and even then live a decent life, inspires a sense of pride in what one does and that add quality to their work.
This doesn’t mean Istanbul is free from poor quarters or petty crimes. They have it in plenty but a better social index and upkeep gives even an ordinary Istanbulu a sense of dignity, a sense of being which is rooted in their history, it reflects in their work culture, in their conduct and in their sense of self.
This in turns helps create an overall impression of well being and quality that enhances a tourist’s Istanbul experience.
Overkill is always counter-productive
Over the last one and a half decades, the new government in Turkey has embarked on a mosque building spree. The conservative government has its own compulsions but it has resulted in an unintended consequence. All the mosques in Istanbul are a derivative of Hagia Sofia or are its exact replica.
The old sketches show that if you stood at the European side of Istanbul at a place called Karakoy ferry front, you would witness the spires on the skyline of the old town belonging to Hagia Sofia, Blue Mosque or Sultan Ahmet and Sulemania Mosque. But now if you stand at the same spot you witness seven mosques from one end to the other all replicas of the original.
If even the smallest modern prayer houses follow the architectural design of an iconic monument then it diminishes the importance of the original. The visitor would be saturated with the replicas all around her and the excitement to see the original would be severely dampened by the time she reaches the original one.
It’s important to retain a degree of exclusivity or at least a cap needs to be in place about how much is too much. Overkill of replicas has a tendency towards the law of diminishing returns and they rob the original of its basic grandeur a bit.

mediaperson worked for TWI, TVI, Dainik Bhaskar, UTV and Hindustan Times in all the divisions print, TV, radio and internet
View all posts by indiadynamic →
This entry was posted in Uncategorized and tagged Hagia Sofia, Istanbul, Taksim Square, travel, Turkey. Bookmark the permalink.

1 Response to Five things I learned in Istanbul